Hostage of the Heart by Linda Acaster 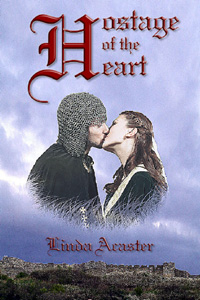 September 1066: the northern militia has been raised to support the new English king against Norse invaders, leaving the Welsh borderlands dangerously unprotected. Rhodri ap Hywel sweeps down the valley to reclaim by force stolen lands, taking the Saxon Lady Dena as a battle hostage.

But who is the more barbaric: a man who protects his people by the strength of his sword-arm, or Dena’s kinfolk who swear fealty to a canon of falsehoods and refuse to pay her ransom? Betrayed as worthless, can she place her trust, and her life, in the hands of a warrior-knight shielding dark secrets of his own?

Hostage of the Heart is also available as an mp3 download from  http://www.audiolark.com/books/hostage-of-the-heart/

Linda Acaster has written short fiction across genres as disparate as Crime and Fantasy, Romance and Horror. Ten have been collected into an instructional ebook “Reading A Writer’s Mind: Exploring Short Fiction – First Thought to Finished Story”. As well as Historical novels, she writes contemporary Fantasy with a strong historical thread.

Email ThisBlogThis!Share to TwitterShare to FacebookShare to Pinterest
Labels: 'Hostage of the Heart', Mediaeval, Wales

Hope it does well for you!
Jen

Thank you Jenny and Jen. Good of you to drop by.