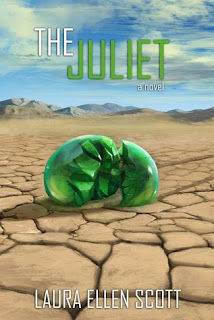 I’m really grateful to Historical Fiction Excerpts for the chance to write about the real life inspiration for Lily Joy, a character in my novel The Juliet, recently released from Pandamoon Publishing. The Juliet is about the search for a cursed emerald in Death Valley, but it’s also about legends, and Lily Joy’s story springs from the legend of Mona Belle, the working name of a prostitute murdered by her lover in the boomtown of Rhyolite, Nevada in1908.

In The Juliet, Lily Joy is the working name of Becky Skinner, a tarot-reading prostitute from the early 1900s who plies her trade in Centenary, a boomtown much like Rhyolite. When Becky kills off her sex worker persona, she rings the final bell on a short but golden era, and Centenary collapses just as Rhyolite did. However, my version is a superstitious take on Rhyolite’s socio-economic reality. At the time of Belle’s murder, Rhyolite was reeling from a financial crash in 1907 that would soon be followed by poor mine assessments in 1908, causing stocks to plummet and citizens to flee. By 1920 there were virtually no inhabitants left, and most of Rhyolite’s structures were picked apart for building materials, leaving the town in ruins that made it appear much more ancient than it actually was. 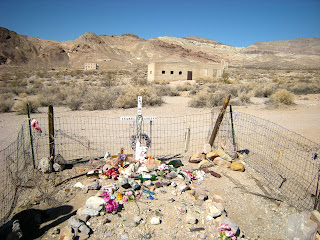 Today Rhyolite is one of the best preserved of Death Valley’s ghost towns, and its remaining broken walls, piles of square stones, and outlines of foundations make it easy to imagine the city as it was in prime, when it was a testament to prosperity and industry, owing to a huge investment in infrastructure by the famed Charles Schwab. In its heyday, the town boasted a rail depot, two banks, a stock exchange, a school, a hospital, and an opera house.

Yet, civility has limits. Rhyolite was not without its murders, suicides, and other violent crimes, especially in its notorious Red Light District. A reminder of that can be found all the way down past the ruins of the jailhouse where there is a single gravesite marked by a white cross with the name Isabella Haskins stenciled on the horizontal bar and Mona Belle on the vertical. The grave is strewn with trinkets from visitors, including booze bottles, high-heeled shoes, toys, beads, fans, and artificial flowers. It’s a riveting sight, especially out there in the desert. The only other time I had ever seen so many tributes was at Saint Louis Cemetery in New Orleans as the purported tomb of Marie Laveau.

Who was Mona Belle? Sadly, the 20 year old hardly made a mark on the world during her short life. We do know that she adopted several aliases, married young, and left her husband to run off with a violent gambler named Fred Skinner. They lived in Rhyolite for only a year, and their turbulent relationship ended when he shot her to death during a drink-fueled argument. It was a shocking crime, and Skinner was moved out of town to avoid a lynching. Belle’s estranged husband claimed her body and took it back to be buried in Washington State where her parents lived. Blogger Osie Turner put together a great post about Belle’s life and death, but if you want a more thoroughly researched account, I strongly recommend Robin Flinchum’s excellent book Red Light Women of Death Valley.

The legend of Mona Belle focuses less on her life than on what happened to her after death. Despite the inconvenient detail that Belle’s body was claimed by her husband, this particular story persists: as the casket of Mona Belle, AKA Isabella Haskett was being carried to the Rhyolite/Bullfrog cemetery by the grief-stricken men of Rhyolite, the women of Rhyolite stopped the procession and successfully prevented the prostitute’s interment with the rest of the Christian community. As an alternative, Belle’s loyal customers buried her behind the jailhouse. Alone but honored in a place of ignominy.

So, is the Belle story true?
No.
Then who is buried in her grave?
Probably no one. 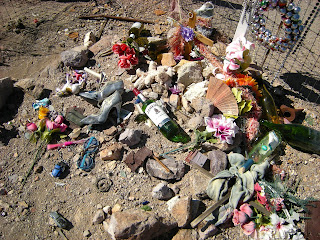 Most people agree that both the site and the story were fabrications concocted by a woman who ran a souvenir shop out of the old depot in the 1950s. Post-collapse, Rhyolite became a tourist stop, allowing a steady trickle of entrepreneurs to trade on the more ghostly aspects of the ghost town. And it should come as no surprise that Mona Belle, being Rhyolite’s most notorious murder victim, is said to haunt its ruins.

That shopkeeper knew what she was doing. The legend of Belle’s funeral procession being turned back is very compelling, offering a twist on the story of Julia Bulette, a beloved Virginia City madam whose funeral procession was attended by thousands. Murdered in 1867, Bulette had become the symbol of prosperous times, and her untimely passing united the community. That Belle’s legend ends with a divided community is a troubling correction, but one that resonates, especially with the mystically inclined.

During Death Valley’s great wildflower bloom of 2005, retired cowboy actor Rigg Dexon gives a rootless woman a gift that will change her life forever: the deed to The Mystery House, a century old shack long thought to be the hiding place of a legendary emerald known as The Juliet. Willie Judy remembers Dexon from cereal commercials she watched as a kid, but now she’ll spend the next seven days searching for the truth about him, the house, and herself, as the history of The Juliet reveals the American Dream’s dark side—one that is corrupt, bawdy, and half insane.

Becky made her list for the week ahead. She was a list-maker now. Traveling up and down the bluff was simple enough, but not with supplies in tow. Before she made the journey to Centenary Mercantile she had to write it all out, and be careful with her numbers. Gone were the days when she could step outside her door and pick up a saddle of rabbit and few turnips to improvise the evening meal.
Becky paused over her work. It was too late to start a garden, wasn’t it? In the basin, gunshots echoed, something that didn’t happen as often as it used to.
The contest was over, the results announced, and Hogg’s Bottle house was now called the Skinner place. Though it was only the middle of the day, long shadows kept the house a little too cold for Becky’s taste, but Marcus reminded her how grateful she would be come summer.
She was grateful already, quite glad to be out of common contact with the citizens of Centenary, especially after Marcus’s report was made public. The town’s collapse, which had begun as soon as the mines showed signs of petering out, suddenly sped up. She watched it change from her vantage point on the bluff. First the clusters of tent homes disappeared, then construction stopped on the school. Some of the burros that patrolled the weeds around their home seemed awfully thin and confused. She assumed their owners had let them go in the hopes that they would join a wild herd.
Then, one night, the electric lights of High Street were not switched on, and they remained unlit from that point onward. Centenary would no longer turn night into day.
Becky put more wood into the stove, but just enough to keep the embers going. Even after unpacking all of their belongings there was still so much to do. The Hogg children had managed to make a young house look old, and one of the first things Becky wanted to do was plaster over the bottles. It made her uneasy, feeling as if she lived in a glass house.
A sharp whistle from below the bluff meant a message had come for Marcus, but Marcus was in town. He still went into the office on a daily basis. Becky went out to the edge to tell the courier just that, but when she looked down there was no one waiting.
“Boy?” she called out. “Are you there?” There was no reply. If the kid was still down there he was probably passed out drunk. A year ago she would have climbed down to his aid, but a year ago he would have delivered his news and received a tip before going off to drown in the beer. Centenary was crumbling around the edges.
Becky returned to the bottle house, pausing on the threshold. She could smell him. The sweat, the filth, the alcohol. Someone was inside her new home, and it wasn’t the courier, either.

Posted by Lindsay Townsend at 08:00