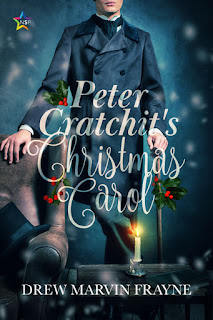 In Charles Dickens’ original holiday classic A Christmas Carol, Peter Cratchit is the eldest son of Scrooge’s lowly clerk Bob Cratchit, a young lad preparing to make his way in the world. Peter Cratchit’s Christmas Carol picks up where Dickens left off, exploring what happens to Peter after the lives of his family are forever changed after a series of ghostly visitations transforms Ebenezer Scrooge from a miserly man of business into a kind-hearted and generous benefactor.
Peter flourishes under the tutelage of his “Uncle” Scrooge, and seeks to make his mark as a man of business, like his Uncle before him. He also begins to explore his attraction for other men. One Christmas Eve, as Scrooge lays dying, Peter embarks on a risky ocean voyage that he believes will secure the future for his family. Onboard, Peter finds love, happiness, and success, only to lose it all by the voyage’s end.
Returning to London, Peter shuns his family and instead finds himself living on the streets, haunted by his failures and his dead lover, selling his body just to survive while he waits for the winter cold to claim him once and for all. But winter snows also mean Christmas is coming, and for the Cratchit family, Christmas is a time of miracles. Can a visit from three familiar spirits change Peter’s life again? Is there one more miracle in store for the lost son of one of Dickens’ most enduring families?

Peter Cratchit’s Christmas Carol
by Drew Marvin Frayne
Excerpt #1
I felt Augie slip his strong arm down my back and around my waist as we all sang along to the familiar carol. I hoisted my own arm around his broad shoulders, and we looked at each other, and smiled.
The scene before me began to dissolve once more. I turned to the spirit, to beg it to let these images remain that way, to let Augie and I remain that way, if only for a few moments more. Yet I caught my tongue when I saw what the tableau before me displayed next. Augie and I, laughing and talking on the deck of the Belisama as we made our way to France; then Augie teasing me as the wind whipped my hair, my wild, tousled hair, off the coast of Portugal; and then, finally, in Barbate, Spain, near the rock of Gibraltar, our first kiss. We were alone, enjoying some well-earned shore leave, walking along a rocky outcrop. The men had stayed near shore, where the taverns and the brothels were. But Augie and I wanted to be alone in this world. He held my hand to steady me as we crisscrossed the rocky shore. And there, as we watched the waves crashing against the gravel-filled shores of Barbate, Augie took me in his burly arms and kissed me.
I remember that moment more fondly, perhaps, than any other in the whole of my existence. And yet, how odd, how strange and wonderful, to witness it from afar! The spirit and I watched as the brawny Scotsman wrapped his arms around my waist and gently brought his lips to mine. We were all smiles and laughter and happiness as Augie kissed me, and I kissed him. I watched as I grabbed his sailor’s cap off his head and ran down the stony beach with it, merry as a springtime jay. Augie, laughing, was chasing me, and I made sure I was caught, and he wrapped his arms around my waist and kissed me heartily once more.
Standing there, watching the scene unfold before me, I could almost feel the whipping wind in my hair, almost feel the springtime sun on my face, almost feel the—
Springtime? “But these are not scenes of Christmases past!” I suddenly realized, turning to the spirit for an explanation.
“Do you object to reviewing them?” the spirit asked.
“I—no, of course not, I just thought—”
“What?” It stared at me with those childlike eyes, and I realized, perhaps for the first time, that it was no child at all, but an ancient being, terrible and innocent and powerful and weak all at once. I said nothing, but nodded my head, and smiled my thanks.
The scene began to alter once more, and it was night, a sandy beach. I knew this beach. I knew it in my heart better than any place in the world. I could close my eyes and still smell the salty air and the scent of sweet dates and feel the rough spray of the Strait of Gibraltar on my skin, no matter where or when I was in the world. This was Tangier, across the strait from Spain, in the sultanate of Morocco.
This is where Augie and I first made love.

Peter Cratchit’s Christmas Carol
by Drew Marvin Frayne
Excerpt #2
“Peter,” Uncle Scrooge simply said, clutching me tight in his grasp. “My poor boy.”
He was not the wizened, pale invalid I remembered so vividly from the end of his days. This was the Scrooge of my boyhood—skinny, yes, even gangly, but lively and robust and energetic. “I’m so sorry, Uncle,” I said between moans as I sobbed bitter tears against his shoulder.
“My boy, my boy,” Scrooge was saying, still holding me tightly and rubbing his palms across the blades of my shoulders. “Sorry for what?”
His simple question left me momentarily dumbstruck, and despite myself, I grew silent. “I do not know, Uncle,” I finally replied, and, indeed, I did not know, a sensation that resulted in some kind of half sob, half laugh, and a gentle, consoling smile from Uncle Scrooge.
“Peter, my boy,” he said again, wiping my cheeks with his fingers. “Such pain you’ve known.” He took my hand in his. Yes, this was the Uncle Scrooge of my heady boyhood days. He was even dressed for Christmas, in a maroon vest made of crushed velvet and a sprig of mistletoe on his lapel. “Come. We have much to do this day.” And without another word, Scrooge led me out of the tavern and into the world beyond its door.
And what a world it was! This was not the dingy street outside that dingy tavern, nor was it the dankest, darkest portion of the night! It was morning, a shining glorious morning, the giddiest morning of them all—Christmas morning. And we were no longer on some side street in the poorest part of Camden Town, but right in the heart of merry old London itself.
“But—but how did we get here, Uncle Scrooge?”
But the old man only laughed. Taking me by the hand, he marched me down the street. Wondrous sights and sounds assailed my eyes and ears! Everywhere people called out to one another—“Merry Christmas!” and “Glad tidings to all!” and even a premature “Happy New Year!” or two. There had been some snow the night before, but only enough to dust the city in white powder, as if each building were now coated in a generous supply of icing sugar. This dismayed the mobs of scampering boys, who lacked true substance for a Christmas snowball fight. But each and every shop window seemed straight out of a Christmas wonderland. The fruiterers’ stands were especially radiant. Pyramids of apples and pears stood proudly next to bunches of red and green grapes, fitting colors, indeed, for this time of year. I saw heaps of filberts and, next to them, the dazzling yellow and orange of citrus fruits. My mouth watered at such sights. At the grocers, men and women lined up, awaiting wrapped parcels, and I heard the clacking sound of large tea and coffee tins being opened, and closed, and re-opened once more. I saw shy girls staring at bundles of mistletoe, and a sturdy matron happily clutching a parcel of figs and French plums almost as plump as she was.
And the smells! The faint scent of citrus stuck in my nostrils, and the yeasty smell of fresh bread came out of every bakery and every home on the street. But it was the perfume of roasted chestnuts that truly threatened to overwhelm all of my senses. That lush, earthy aroma, so evocative of this time of year, of happy Christmas tidings…even as a boy, my father would always secret home enough chestnuts so that we may each have one upon a Christmas Eve, still warm from being kept safe in his coat pocket. Even the city itself smelled faintly clean and new, as if the lightly-fallen snow was enough to wash away the degradation and stagnation of so many past eons.
And Scrooge! My Uncle Scrooge was with me, taking me through the streets, pointing out various happinesses I might have missed, stopping here to offer blessings to a shy young girl, and standing there in front of a group of noble carolers proffering a rousing chorus of “Good King Wenceslas.” I had a hundred questions for him, nay, a thousand, but I could only think of one to ask.
“Uncle, dear Uncle, why have you brought me here?” I said, planting my feet midstreet in order to halt the pell-mell nature of our march through the city.
“Why have I brought you here, dear boy?” he asked, an impish light glinting from his eyes. “Why, Christmas, dear boy. Christmas! Look around you.”
“I’ve looked, Uncle. I see. But I don’t understand.”
“No. No, you don’t.” This was said with all affection, and no malice, but still, his words stung.
“Why are you here?” I asked him and then, more ably articulating the question I truly wanted to ask, I tried again. “How are you here?”
The old man placed his hand on my shoulder. He moved his mouth close to my ear. “I asked an old friend for a favor,” he whispered, giving me a small wink and brushing the side of his nose with one finger. “Come!” he added, far more loudly. “We’ve much to see!”