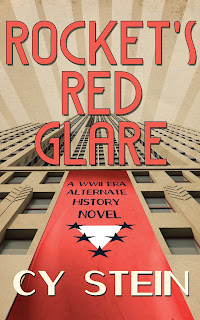 “Jack Kennedy, FBI, sir.” Kennedy reached into his
pocket, pulled out his badge, and presented it.
Leo paled. Should he make a run for it? No, Kennedy
looked about half his age and could catch him easily, especially
since—at the moment—this block was empty of people. His
palms and brow began to sweat.
Kennedy noticed Leo’s discomfort.
“Oh, don’t worry, Professor.” He smiled, a large, toothy
grin. “I’m not going to arrest you. I’m here on more of, ah...
a social visit. A way to get acquainted, I think. We need to
have a chat, you and I, and this seems as good a place as any.
Somewhere we won’t be overheard. So please, walk with me.”
Relief flooded through Leo, though he remained guarded.
He recognized the name Jack Kennedy as the son of Lindbergh’s
crony Joseph Kennedy, former ambassador to the U.K. He
knew Kennedy as a defeatist and before that, an arch-appeaser
of Hitler, and currently as the Secretary of the Treasury. He
had been unaware Joe Kennedy’s son was working for J. Edgar
Hoover and couldn’t imagine how anything useful would come
from this interview. But since Kennedy wasn’t hauling him off
to face a federal judge, Leo thought it might be best to hear him
out.
The two men crossed First Avenue at a traffic light and
continued along E. 71st Street in the direction of the East River.
This block was distinctly shabbier than the one to its west. There
were fewer single-family brownstones fronting either side of the
street, and more four and five-story walkups, which increased
the local population density. Still, the block was a pleasant
residential neighborhood, a calm, tree-lined lacuna in the midst
of Manhattan’s quotidian turmoil.
“I understand, Dr. Szilard,” said Kennedy, when they
were about twenty yards from the motorized tumult of Second
Avenue, “that you are the local head, or leader, whichever you
prefer, of a group that calls itself the Resistance.”
“Why, Mr. Kennedy,” Leo said, his heart skipping one
beat and then another. “Where did you get a silly idea like
that? I’m head of nothing and leader only of myself. I’m afraid
someone is making up stories about me.”
“Ah, then I am sorry, Professor, for taking up your time. I
have some information that would be of interest—I think great
interest—to that organization. But perhaps you are not the right
person after all.”
Leo squinted. There was no way to know if J. Edgar
Hoover was setting a trap, using Kennedy as bait. But the fresh-
faced young man seemed so earnest and honest that Leo was
moved to take a chance.
“And if I may ask,” he said, “what kind of information?
It is possible I know people who might be interested in talking
with you, though I have no direct connection to the organization
you are referring to.”
The two stopped next to a stunted oak tree struggling
to survive in the chemical ambiance of midtown Manhattan.
Kennedy drew close so he wouldn’t be overheard. “Information
that could take down Lindbergh and the corrupt kleptocracy of
fascists destroying our beloved country.”
Leo stared at him. “Your father among them, Mr.
Kennedy? Am I to believe you are ready to commit patricide?
Do you know what the ancient Romans did to a man who killed
his father?”
“Ah, something about a sack and a monkey and the Tiber,
as I recall.”
“You are correct, Mr. Kennedy. They tied him up in a sack
with a monkey, a dog, a rooster, and a snake and tossed him in
the river.”
“Ah, that sounds, ah... painful, Professor.” Kennedy
grimaced. “But this isn’t ancient Rome. Don’t get me wrong; I
love my father dearly, but he can take care of himself. Always
has, always will. The man is indomitable. But I have to make my
own way. And that’s why I want to join up with the Resistance.”

Visit Cy Stein on Goodreads at
https://www.goodreads.com/book/show/49455562-rocket-s-red-glare
and coming soon in 2020:
http://www.cysteinbooks.com
Posted by Stephanie Barko at 01:22