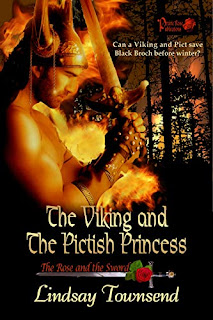 THE VIKING AND THE PICTISH PRINCESS https://www.amazon.com/gp/product/B08LTGYTHV/ref=dbs_a_def_rwt_bibl_vppi_i20

The lone figure rose silently from the loch. Emerging from the grey shimmer of a winter morning with water sheeting off his body, he glided over the submerged boulders onto the shore of her island. Bindweed scrambled into a holly tree and dropped to the parched ground. She gritted her teeth against the shout surging up her dry throat, old fears from the past made real.

He was big, this invader, big as a king stag of the forest, tanned, barrel chested and with arms thicker than her legs. His black hair, dark as December pine cones, matted itself to his skull in long streamers of shadow and eyes, the colour of storm clouds, were quick and piercing.

“Black Norse,” Bindweed muttered, not daring to stir as that fierce grey gaze swept over her hiding place. His thick gold collar and armlets flashed when he strode by, arrogant as a lord. He moved with the swift, quiet grace of a warrior, the low winter sun illuminating his leather tunic and trews, the long dagger strapped to one thigh, his sword on the other.

Spy or assassin, Bindweed wondered, watching his retreating back. He made for her cave-house as if he had walked the path a hundred times, though she doubted he sought her skill in herb-lore. Still she did not stir.

The first snare on the trail he avoided with a snort of humour, the second, set below a seeming bed of innocent pine needles, swallowed him whole. Bindweed was out of the holly and sprinting before the Viking had stopped his bellow of surprise. A quick jerk of the rope hidden by ivy had the nets and timber unravelling and the trap closed. She quickly pinned it down, panting hard as she rolled the lock-stone in place.

Thirteen feet below, in the round pit it had taken her three summers to dig and harden with fire, the black Norse prowled, thumping the sheer walls and slamming the mud-churned floor. He would not look at her. Bindweed did not care.

“No one comes here,” she lied—why tell truth to the enemy? “Yell away,” she added, when the stranger’s mighty chest swelled like organ bellows. “None shall hear.”

The Viking lunged up. She stamped his clenching fingers off the timbers and nets and he cursed and spat. “Food later,” she told him, spotting how his eyes narrowed briefly in calculation. He understands me, then.

It did not matter. Tomorrow night she would lace his portion and his ale with enough sleeping draught to fell an ox and then drag him out, to question at her leisure. Thank the stag god and the great mother that I heeded my instincts four summers ago to fashion these traps. Sometimes my senses are not only tuned to women’s healing, but to more brutal matters of survival.

She had no time to celebrate, however. Now she was exhausted, harp-string taut tension replaced by a yawning tiredness. Without troubling to undress, she stumbled into her bed and slept.

She dreamed of her past, an old horrific recollection, that began, as too often, with screaming.

She was seven summers old when her father Giric killed her mother. Nothing as quick or kind as a knife, but his selling of Kentigerna bright-hair into slavery, to a Viking, was still murder. Years later, she had never forgiven the old man, nor forgotten her mother’s screams.

She had tried to follow the Viking’s longship, running hard for the track by the loch. Mongfind, her half-sister, older and bigger than her by two summers, had grabbed her. After hearing Mongfind’s shouts, Giric himself had seized and flung the little one, flailing and punching, into the ancient black broch that gave the people their name.

She had hammered on the locked door until her knuckles were bloodied, then sprinted up the winding staircase to the roof of the broch. Seeing a flash of her Ma’s bright red hair in the longship’s bowels, she had clambered right over the thick circular walls of the broch and leapt down.

“Me, too!” she yelled in her later dreams, though she could not remember if she spoke the words. She only knew that if the ship sailed, she would never see her mother again.

Seven years old, I knew this! But then bastards have to grow up fast.

She landed in a mess of heather, winded and broken. She scrambled to rise and a searing pain in her left foot seized her whole leg. Too shattered to scream, too shocked to move, she watched the Viking longship and her mother sail away.

Irish Maeve, old and wrinkled as a dried out leather flask, prodded her with her walking stick.

“You will do, now get up. There’s work!” Maeve ordered, laughing as she burst into tears. “Get to it, Bindweed.

“She clings,” Maeve told the whispering onlookers, who smirked or shook their heads and turned away.

From that day, the little girl was Maeve’s servant. The name her mother gave her was forgotten and all knew her as Bindweed.

Later, Bindweed learned, a travelling tinker who had a taste for young things had wanted to buy her, but Irish Maeve had refused his offer. But only because I was quick and clever. She never forgot how the old woman had laughed at her hurt and grief, how the others in her father’s fort had turned away.

She never saw her mother again.

Six years later Irish Maeve died in her sleep. Bindweed buried her mentor on their island home and mourned for three nights, as custom demanded. On the dawn of the fourth day, she poured the ashes of a barley loaf over the new grave and squeezed a final tear from her smarting eyes.

Enough of that, as Maeve would say. I respected her as a healer, but no deeper feeling than that. She took me in for her own convenience and laughed at my grief. Though she did keep the secret of the smaller cave, so there was that.

Bindweed patted the cold earth once, in valediction, and turned back to the small cave where she and the Irish wise-woman had made a dwelling and a home of sorts She was Bindweed Silverhair, wise-woman of the loch, keeper of the island pool, the one maidens and womenfolk turned to so she might heal their hurts. Poultice their beasts. Charm the chickens into laying more eggs. No one now remembered she was the bastard get of Giric the Harsh, a warrior and giver of gold, who had sold his own mistress, her mother Kentigerna, into slavery.

Lightning strike him down for that! Why does Giric thrive? Why do his well-fed, well-dressed legitimate sons and daughters parade through this land like the blessed children of fairy. Not that I wish them ill, but still—

Revenge did not interest her, for that would merely prove she cared about Giric’s ill-nature. She had a home and skills, a name she had made respected. She ate well, even in winter and before harvest-time. No man would want to wed her, with only this scrap of a wooded islet as her land dowry, but she might take a handsome highlander as a lover, someone quick and wick and small as herself.

No boy with light blue eyes, though, no youth with a beard like Giric’s. Send me a sunny lad, nimble with his fingers—

A long, low snore from nearby brought Bindweed stark awake. It was time for her to move.

Time to spar with the Viking again. Even if the brute sleeps.

Olaf came to with a pounding mead-style headache and a sick stomach. Twitching sore limbs he found himself bound, hand and foot, and blindfolded.

A pot clashed against his teeth and he guzzled the weak ale, soothing both headache and sore jaws. “Why did you not slit my throat?” he demanded, after the cup was withdrawn.

A young female. Another wise woman? Olaf risked a confession. “I was told the witch Irish Maeve was dead, her place empty. I planned to move in for the coming winter.”

“Who told you that? In truth, you cannot. I am her heir.”

“No one mentioned you.”

When the wench said nothing more, he did not deign to respond to her question but asked, “What did you drug me with?”

“Drenched-salted the food, spiked the ale.”

He sensed her smirk and his bound fists clenched. She had admitted nothing new. “My men will find me.” And kill you. The threat went unspoken but hung like a gibbet between them.

A rustle like dry leaves made Olaf turn sharply to his left but the woman was already drawing back, leaving a whiff of lavender and a touch of the soft wool of her skirts.

True, since his headache was almost gone, though he tensed in irritation at her ignoring his warning. “And my men will still find me.”

“You have lain in my pit for two days, been sleeping hard for a day and a night, and none have come looking for you. Now there is fog. No ships in or out of the loch, y’ken?”

He breathed in deeply against her mockery, savouring her perfume afresh. “Aye.”

“No men are allowed here on Maiden’s Isle. For despoiling this sacred space I could spell you with ill luck for the rest of your life.” She paused, allowing the silence to grow, then delivered her final threat. “The curse would stick.”

Dread iced up his spine. Has my bad luck tracked me from Byzantium? Fore God, it has been evil since Karl’s death. Grief sleeted through Olaf afresh at the memory of his brother-in-arms, dead these six months and entombed in the white marble of Constantinople.

“What do you want from me?” he demanded. Anything to stop thinking of Karl, cut down in ambush in an arid city street, hundreds of miles away.

“Your name. Why you are on the run. The truth.”

“I am Olaf No-Kin.” He did not ask how the wise woman knew he had neither ship nor men, though he inwardly cursed the loss of that flimsy advantage. How can I do anything if she does not respect me? “I quit my lord Ragnar’s service and took the first passage I could to Alba to offer my sword to a laird of the Picts.”

“A mercenary. Why, if you left his war-band, does this Ragnar pursue you?”

Published by Prairie Rose Publications, this novel is available for pre-order and will be out on November 5th.

Posted by Lindsay Townsend at 09:45