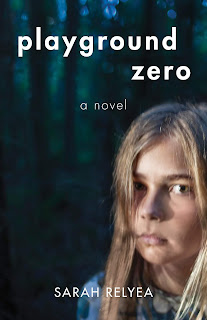 An eerily compelling déjà vu of the free, wild and jeopardy-ridden kid scene in late-1960s Berkeley. Uncanny and powerful.
-Charles Degelman, Editor, Harvard Square Editions
Like a trip through the Looking Glass, Sarah Relyea's engrossing debut novel takes you by the hand back to the sixties, where social rules were being challenged and political upheaval was the norm. Relyea tells the absorbing story of twelve-year-old Alice and her family through a series of narrators as they each experience the kaleidoscope streets of Berkeley. But she saves her most lyrical and beautiful language for the disintegration Alice sees and the heartbreak she experiences.
- Patricia Hurtado, Brooklyn writer and journalist with Bloomberg News
LINKS


Blurb
1968. It’s the season of siren songs and loosened bonds—as well as war, campaign slogans, and assassination. When the Rayson family leaves the East Coast for the gathering anarchy of Berkeley, twelve-year-old Alice embraces the moment in a hippie paradise that’s fast becoming a cultural ground zero. As her family and school fade away in a tear gas fog, the 1960s counterculture brings ambiguous freedom. Guided only by a child’s-eye view in a tumultuous era, Alice could become another casualty—or she could come through to her new family, her developing life. But first, she must find her way in a world where the street signs hang backward and there’s a bootleg candy called Orange Sunshine.


She would remember the dead man’s presence. The peace marches had been solemn, if informal—government on the grass. Now a shantytown had sprung up in the muddy park, as monuments glimmered under a cloudy noon.

The manuscript of this novel was semi-finalist for the Black Lawrence Press 2018 Big Moose Prize.

Posted by Lindsay Townsend at 00:00

Thanks for the upload, Lindsay, Always a pleasure.

Thank you, Lindsay, for this presentation!

My pleasure, Stephanie and Sarah!